My name is Javier Agüera...

...and I create mobile technology

Javier Agüera became an entrepreneur at just 15 years old. He identified a need in the mobile industry and decided to solve the problem. So he and his co-founder developed an Android phone where users can choose their own operating system—Geeksphone.

"At the heart of it was the firm belief that from our humble beginnings we could try to make something different, inspiring others along the way." 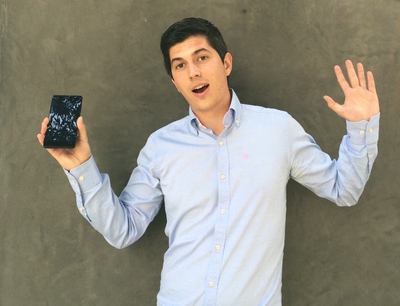 What inspires you to work on technology?

Javier: My main inspiration to work with technology was the realization of how technology can be both an agent for positive change, and at the same time something that divides humans further apart. It takes brave scientific and creative minds to keep pushing past our boundaries, and it takes even braver people to ensure that progress is actually meant for good.

Those challenges are what fuel my batteries every morning, and technology itself is the most powerful tool we have for positive change.

Why do you think it's important for students to learn about computer science and technology?

But it's not the case anymore. We live in a world where computers and advanced technologies play a vital role in almost everything in our daily lives. Being a banker and not knowing how to program will be equivalent to a writer not knowing how to type.

Technologies like Artificial Intelligence, 3D Printing, Internet of Things will change every profession... filmmakers and musicians are among the most tech-savvy people I've met so far—they are among the first to adapt!

How did you come up with the idea of Geeksphone?

Javier: When we began, I was a 15 year old in an ordinary high school in Madrid with no entrepreneurs around. Back then I was freelancing (as an amateur) doing graphic design to earn some extra cash, which led me to my—quite older—co-founder.

Our naivety pushed us to embark on an adventure that later led us to be the first Europeans to launch an Android phone to the market. At the heart of it was the firm belief that from our humble beginnings we could try to make something different, inspiring others along the way.

What’s been the most exciting problem you’ve taken on?

"Most of the exciting problems I've had to tackle all came from quite critical situations. That’s the fate every entrepreneur faces, although the satisfaction when things go well is worth it."

Javier: Blackphone (an encrypted phone for security) was probably the project where we faced the toughest situations. We realised very early that in order to create a secure smartphone that actually protected people, the users should be able to understand it and use it like the one already in their pockets. It was my job to work with dozens of people ranging from secret agents to humanitarian activists to understand their daily lives and create something equally attractive and useful for all of them at the same time! It worked on the 2nd try ;-) 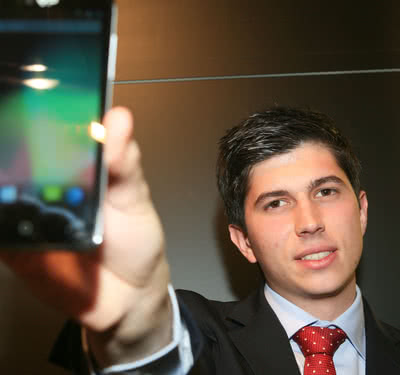 What would you tell the innovators of tomorrow?

Javier: In order to be an innovator tomorrow, you have to begin today. It's not about what you create now or in the future, you should not compare yourself to others or what they have accomplished at certain age. Focus on creating your own story! It's the mindset that matters, and the mindset that will propel your future. Get crafty, think outside the box, never stop learning, unleash your creativity, and remember what matters. That's all it takes!

Print a poster of Javier for your classroom 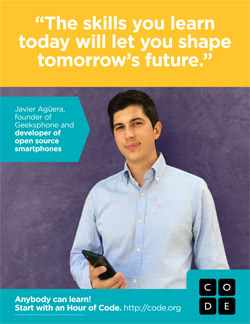