... and we're Spitfire strong because of code

Erin Parker and Nidhi Kulkarni learned about computer science at different times in their lives. They teamed up to solve a problem they’re passionate about. Through technology, they found a way to empower potentially millions of women to learn weightlifting and other varieties of strength training. The app gives you daily workouts, tips, and encouragement—for beginners or experts.

“Our vision is a world where women are half of the weight room and where we train without limit or restraint to build our strength and power.”

What is Spitfire Athlete? 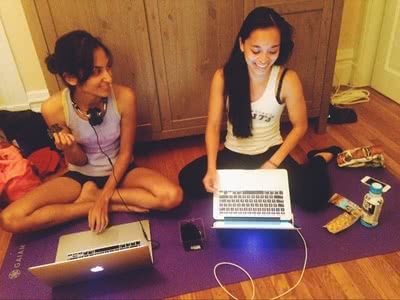 Erin and Nidhi: The most exciting part of Spitfire Athlete is that it impacts women's lives at the personal level, all over the world. We have helped women lift more than their body weight, learn how to do their first pull-up, compete in their first triathlons, and train to overcome anorexia. Our vision is a world where women are half of the weight room and where we train without limit or restraint to build our strength and power.

Tell us a bit about your own personal journeys into technology.

Erin’s story: I started Spitfire because I was frustrated with the quality and message behind many women's fitness resources. They were more about exercising to look a certain way and not about how strong and powerful you can be.

I remember what it was like to decide to commit. I figured, if I learn to program, even if I fail, I would have at least failed building something that can help scale what I've learned to potentially millions of people. And that in itself is a worthy pursuit. At the same time however, I decided failure was no longer an option. I wasn't going to let myself stop until I’ve built what I envision in my head Spitfire can truly be. 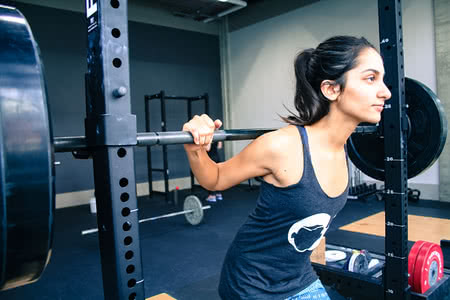 Nidhi’s story: My math teacher told me to try an introduction to computer programming course in high school because she thought I would be good at it. My inclination in high school was towards the sciences like chemistry and physics rather than tech and engineering.

I ended up being accepted into the Women in Technology program at MIT for a summer where I designed and built an electromagnetic motor. It wasn’t the fastest machine, but was singled out by the professor as having a great design and being implemented well. He told my team that he initially thought the design was too ambitious for even his graduate students to build well in a few days, yet we had managed to do it.

That was probably the first time I felt that I was well suited for a career as an engineer.

Erin and Nidhi: We love building technical products together. We work really well as a team because we both love putting our heart into making a product truly great.

How can mentors help?

It's good to have mentors, but we don't rely on them to make decisions for us.

Ask for help, but make the decision based on what you believe is right, not based on someone else's experience. A mentor’s experience and vision is not the same as yours.

Focus on following your intuition. Listen to people's thoughts and advice as a data point to inform a decision that you ultimately make.

What would you tell the innovators of tomorrow?

Don't be afraid to try something many, many times until it really clicks. If something doesn't work out the first time, use that as a learning point to try again. Don't give up on yourself.

Print a poster of Erin and Nidhi for your classroom 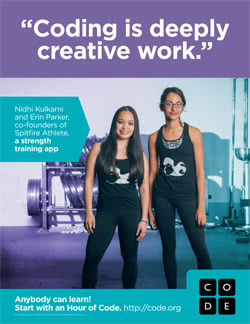